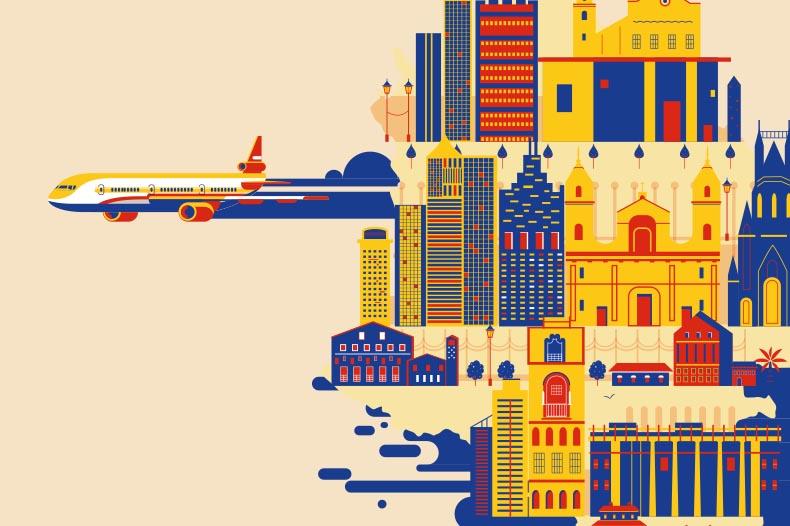 The first Defendant was a Colombian airline providing domestic flights in its country, trading under the “EasyFly” name (a partial acronym of its registered name, Empresa Aérea de Servicios y Facilitatión Logística Integral SA). The Second Defendant was the director of the company. The Claimant, easyGroup, owner of the ubiquitous “easy” family of marks including “easyJet”, complained that EasyFly had:

An action for infringement of its registered trade marks and passing off was filed by easyGroup. Because the Defendants did not have a place of abode in the UK, easyGroup applied without notice for permission to serve the Defendants out of jurisdiction in Colombia.

In addition, the Claimant sought to add ATR as a Third Defendant, which was granted initially but dismissed by Mr Justice Nugee here. EasyFly applied to have that decision set aside, claiming that there were deficiencies in the application.

Indeed, several requirements needed to be satisfied, and they were reviewed by the Court. They included the need for a serious issue to be tried (CPR 5 6.36, Practice Direction 6B, paragraph 3.1, and case law) and the requirement for “full and frank disclosure” (White Book (Civil Procedure 2019), paragraph 6.37.4). Thus, Nugee J reviewed whether the alleged facts could arguably constitute trade mark infringement in the UK and the EU and passing off in the UK, and then he reviewed whether “full and frank disclosure” had indeed taken place.

Nugee J reviewed whether the facts, as presented in the statement of case and the witness statement written by easyGroup’s solicitor, would support an arguable case for trade mark infringement and passing off.

As regards the website, it was noted that while easyfly.com.co could be accessed anywhere in the world, the case law stated that it actually had to be targeted at the UK. Notably, the site was in Spanish, with prices in Colombian pesos.

On the other hand, although the flights offered were exclusively within Colombia, any advertising and sales to UK customers would constitute use of the mark in the relevant jurisdiction. Thus, the marketing emails, the ticket sales and the press release at the air show were possible infringing uses of the mark.

The Defendants claimed that the presence of “EasyFly” on the press release amounted to the insertion of a corporate name. Nugee J highlighted that it was arguable here that a link had been established between that sign and the airline services provided, and thus it could have been a form of advertising. Further, the use of “EasyFly” there may have affected the function of easyGroup’s marks, and it could be argued that seeing EasyFly in the press release could be interpreted as meaning that the airline services had an origin associated with easyGroup.

Likewise, the painting and flying of the planes (in full view of the public) before they were delivered to Colombia – even if the aircraft were only test-flown in France without any passengers on board – was a form of branding and advertising.

There was therefore an arguable case for trade mark infringement.

There was no question that easyGroup had goodwill in easyJet and its family of “easy” marks in the UK, the first requirement for passing off. There was an arguable case that the Defendants’ use of its signs could constitute misrepresentation that its services were associated with easyGroup, which would cause damage to the Claimant because of dilution of its brand. The absence of actual evidence of confusion among UK consumers and of damage did not prevent there being a serious issue to be tried. The possible loss of control by easyGroup of its brand was an important concern and the matter did raise triable issues.

It was argued that there had been procedural failings, the most important of which was the failure to make full and frank disclosure of facts material to a without-notice application, as required in the White Book (Civil Procedure 2019).

The evidence provided by the Claimant was in a witness statement drafted by its solicitor. It stated that EasyFly’s services were “inferred [to be] sold to persons wishing to travel from London, or other airports in the EU, to Colombia”. A natural reading of that statement would be understood to mean that EasyFly might be offering flights from London or the EU to Colombia, while the intended meaning was that travellers from London or the EU to Colombia could purchase internal Colombian EasyFly flights before their departure. Likewise, the particulars of the claim included the statement that the Defendants “offered passenger airline services […] in the European Union and/or the UK”. While the witness statement contained as an exhibit a letter on behalf of the Defendants stating that EasyFly did not operate services into or out of the UK or the EU, a judge could not be expected to pick something from the exhibits unless it had been pointed out to him; material facts had to be explicitly drawn to his attention, as stated in the White Book.

Likewise, stating that the Defendants’ website and Facebook page were “accessible” to customers in the UK and EU, without pointing out that they were all in Spanish or that prices were only in Colombian pesos, confirmed Nugee J’s position. The fact that the tickets were available to UK and EU customers through a broker and not via direct sales, and that the business was entirely Colombian, should have been highlighted.

That amounted to a failure to disclose all material facts fairly. It was probably not deliberate, but the ambiguous phrases did “leave the position unclear and may have unwittingly misled” the lower court.

On that basis, Nugee J set aside the order for permission to serve out of the jurisdiction. Thus, easyGroup would have to reapply for permission at a later date.