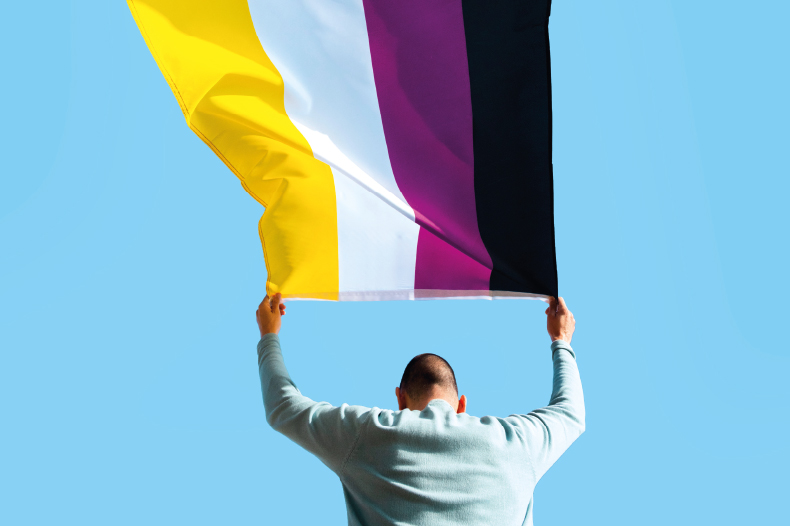 I always knew that I didn’t fit in the world in a way that was expected, and given that I was always attracted to women, I came out as gay to my best friend at the age of 13.

I knew my issues were gender‑based, but there were no role models and there was no language that fitted how I felt.

When I finally heard the non‑binary definition in 2018, I suddenly realised, aged 46, that they were talking about me.

We all have many different strands to our identity, which make us who we are. Here’s a good starting point:

Non‑binary people can identify with various degrees of masculinity and femininity, androgynously, or may have no gender at all.

Gender is made up of two key parts: how a person feels inside (their gender identity) and how they show this (their gender expression). These are both distinct from biological sex, which is assigned at birth.

While the term “trans” encompasses people whose gender is not the same as, or does not sit comfortably with, the sex they were assigned at birth, some non‑binary people don’t see themselves as trans.

It’s always important to respect the language someone uses to define themselves.

I identify as non‑binary, but I’m not necessarily trans. In the true sense of the definition, I am trans, to the extent that my gender identity is not the same as the one I was assigned with at birth.

My gender identity is 50/50 male/female and I am perfectly happy with that. For other non‑binary people, the experience can be very different. It is a spectrum. People can be anywhere on that spectrum.

An understanding of these scales can really help when it comes to understanding someone’s identity, and that will help us all to be more tolerant. The most important thing is to listen and respect the way in which people identify themselves.

Why am I telling you this?

I’m telling you this because non‑binary people are often ignored in the world in which we live. If not ignored, then we are criticised or (my particular favourite) told we don’t exist.

A common myth is that identifying as non‑binary is somehow “attention‑seeking”. The number of transgender hate crimes recorded by police in England and Wales numbered more than 2,600 in 2020/21. Is this really the kind of attention anyone would seek?

I am lucky enough to be the co‑chair of an LGBT+ network group which is passionate about changing lives for the better, and this is within an organisation – the UK IPO – which really values difference and which strives to create an environment where people can bring their whole selves to work.

This is important, because to really respect one another, it is clearly important that we all understand one another.

In the last ten years, the IPO has introduced a transitioning policy, has an ongoing programme to increase the number of gender‑neutral facilities, and has changed the language it uses in policy documents.

It is now in the process of assessing all correspondence and guidance to identify language that needs to be made gender‑neutral.

Most of the time, using non‑binary language isn’t difficult. Indeed, we do it by default if we don’t know someone’s identity, eg “They have left their bag on the chair”.

The UK’s Office of the Parliamentary Counsel and the Government Legal Department have been promoting the use of gender‑neutral drafting for UK statutes and statutory instruments for many years. Both believe there is no reason why gender‑neutral drafting cannot become the norm across the profession. They have produced a guide (available at interlawdiversityforum.org) which distils years of work and is well worth a read.

As I near my 50th birthday, I can honestly say that I am happy where I am now. I wish I could have shown my younger self a brief glimpse into the future. I hope that by talking about these issues around International Non‑Binary People’s Day, others with similar experiences may realise they are not alone, and still others may think again about their assumptions.

I hope that my perspective as a non‑binary person and my professional role mean that I am well placed to show others in IP some simple ways to demonstrate support.

You wouldn’t believe how the smallest acknowledgement, such as using someone’s pronouns, can make a difference to them.

How to support trans and non-binary colleagues

14th July 2022 is International Non-Binary People’s Day 2022. Perspective articles represent only the views of the author.

The role of a Chartered Trade Mark Attorney