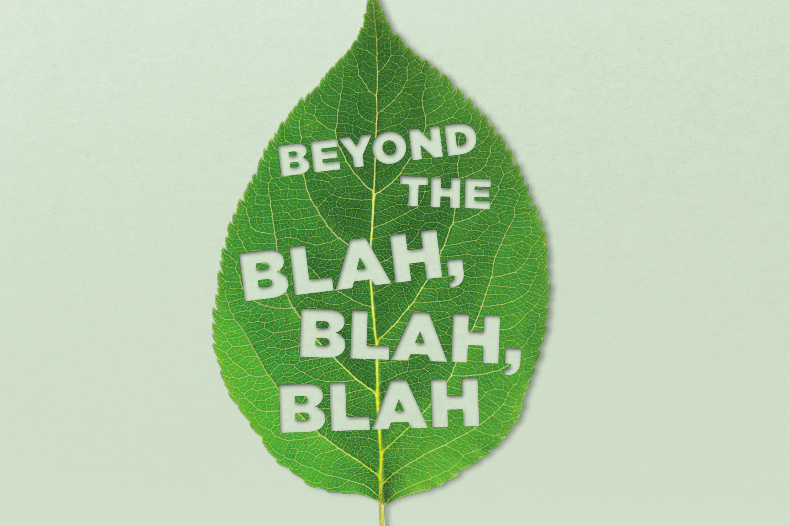 “This is all we hear from our so‑called leaders: words that sound great but so far have not led to action.”

Thunberg’s mocking tone signalled a deep exasperation with the state of human progress on our climate challenges, and research indicates that her dismay was well founded.

In March, the Independent Energy Agency reported that in 2021, global CO2 emissions surged to their highest ever level, hitting 36.3 billion tonnes.

Although renewable power had enjoyed its strongest ever year of growth, increased coal use driven by a spike in gas prices outplayed it.

With all that in mind, it is hard to think what individual industries can do to face down this daunting trend. But in the UK legal sector, firms are taking the need for action seriously – and backing up their commitments with tangible deeds.

At the London headquarters of Charles Russell Speechlys (CRS), Partner David Berry has played a leading role in shaping the firm’s sustainability strategy, a task which began in 2017.

It was comprised, he says: “Not of environmental lawyers, but of volunteers from across the firm with a passion for this area.”

However, the firm wasn’t yet equipped to calculate its carbon footprint or the impact of its initiatives. It contacted the Legal Sustainability Alliance (LSA) for help.

“That enabled us to find out what other law firms, bigger and smaller, were up to,” Berry says. “In our competitive environment, firms tend to be quite tight on information.

But in this domain, refreshingly, there’s a lot of transparency and willingness to share our experiences around various problems and challenges.”

CRS eventually became an executive partner of the LSA, which involves contributing to its funding. Berry says its “small but high‑quality team has helped us learn a great deal about how to move forward”.

When COVID‑19 struck, CRS used an employee survey to assess the carbon footprint of its locked‑down workforce. “By having an unoccupied office,” Berry says, “we exported energy usage to people’s homes – but it was still part of our carbon footprint.”

That measurement is now being expanded to cover employees’ commutes, and the London HQ is now equipped with e‑bikes which staff can use for local journeys to client meetings.

The firm is now using 100% renewable energy suppliers for its UK offices. It is also working towards a target of being net zero by 2030. “That’s very ambitious and challenging,” Berry admits. “But we think it’s achievable.”

To administrate and measure such initiatives, Berry recommends that a firm in the early days of its sustainability drive should develop an Environmental Management System.

That will enable partners to review data on at least a quarterly basis to determine whether they are on track to meet their targets. He also highlights the value of expert consultants. “They will help you to avoid greenwashing,” he says.

Brands risk being hugely chastised if they get that wrong. So, he says, “trying to cut corners or failing to take these efforts seriously would be a huge mistake.”

Another firm which has benefited from external guidance is Appleyard Lees, which last year was certified a CarbonNeutral® company.

The accreditation shows that the firm has adhered to the CarbonNeutral Protocol to establish a clear, credible and transparent track record of relevant action.

To achieve neutrality, the firm partnered with Natural Capital Partners, who devised and maintain the Protocol. Meanwhile, to annually evaluate its carbon footprint, the firm has teamed up with third‑party carbon management specialists RSK.

Partner David Walsh has led the project, together with Trainee Patent Attorney Emily Bevan‑Smith, who says: “We started by calculating our carbon footprint and our impact on the environment.

"This involved measuring our output by examining emission sources associated with our operations, including employee commuting, electricity usage, business travel, water consumption and waste, all in accordance with the GHG Protocol Corporate Standard.”

Bevan‑Smith explains that the firm’s goal “is to reduce our carbon footprint to zero by implementing in‑house efficiency measures. We are also exploring ways we can reduce our impact, such as by using renewable energy sources.”

In parallel, she notes, the firm is looking outside itself: “To offset any emissions which we can’t reduce internally, we’re providing critical finance for external emission reduction projects which deliver positive environmental impacts and which align with our charitable mission to support organisations that create or enable innovation that makes life better.”

The firm is currently supporting three external projects, two of which are related to reforestation or rainforest conservation and providing sustainable livelihoods (in East Africa and Brazil respectively), and one (in India) which uses solar technology to meet energy needs and promote low‑carbon development.

Each project’s emission reductions have been independently verified, enabling Appleyard Lees not only to offset future emissions, but also to immediately reduce its carbon output via the solar project. In turn, local communities benefit from training in renewable energy technology, access to energy for low‑income households, less air pollution, the conservation of biodiversity and better crop yields.

Ethics on the agenda

Bates Wells has proudly put ethics at the top of its agenda for more than half a century. In that spirit, the firm announced in 2015 that it had become a B Corporation, or “B Corp”, joining a global list of, at that point, 1,400 companies pledging to uphold high ethical standards across a range of areas, including sustainability.

Today, there are more than 5,000 registered B Corps globally. Bates Wells was the first UK law firm to earn that certification – and is now one of just two B Corps in the entire domestic legal sector.

“If you look at our history,” says Partner and Head of Trade Marks Mathew Healey, “B Corp status was a natural step in our continuity as a firm. For example, in 2003, our then Senior Partner, the late Stephen Lloyd, fought the Charity Commission to ensure that it would register the Environment Foundation as a charity. That produced the UK’s first legal ruling that recognised sustainable development as a charitable activity.”

However, “it’s not just about sustainability,” notes Bates Wells’ Purpose and Impact Manager Angela Monaghan. “It’s about social justice, diversity and inclusion, and how you conduct yourself within your community; as in, the environmental community in the places where you work, as well as your own particular web of business partnerships.”

Bates Wells was directly involved with bringing the B Corp stamp to British shores, via partners who sit on the UK board of the standard’s awarding body, B Lab. Monaghan explains: “Those partners came back to the firm and said, ‘This is such a great fit for our values – we have to be the first UK law firm to do this.’ Given the history and nature of our business, we didn’t have to operate any differently to be registered – if anything, the stamp cemented our desire to retain values we already had.”

That said, she stresses: “It’s not easy. The first requirement of B Corp status is to continuously strive to improve, which means that it gets continuously harder as you go along. But it provides an external mechanism for checking what constitutes best practice now in relation to what it may become, and for considering how you may get from here to there.”

As part of that drive, Bates Wells made the decision in 2019 to formally recognise the climate and biodiversity crisis within the DNA of its business model – a step the firm took in consultation with internal stakeholders.

“We looked at the facts and said, ‘We acknowledge that there’s an emergency. Now we want to be held accountable for our actions in regards to that,’” Monaghan explains. “As such, we established six commitments that we promised to follow to ensure that we would not play a role in exacerbating the crisis through our own actions.”

The first of these commitments was to achieve net zero by the end of 2019. Bates Wells achieved that on schedule. Other commitments were to: (1) take the climate crisis into account while developing the firm’s business strategy; (2) use the law as a means of addressing the emergency; (3) engage the firm’s people in any decisions related to the firm’s impact on the crisis; (4) encourage staff to live in an environmentally friendly way, and (5) collaborate with others to amplify the firm’s positive environmental impacts.

In terms of how it has answered point 3, Monaghan notes: “One example is the support our lawyers provided to charities involved in the recent case Butler‑Sloss and Others v The Charity Commission, in which two charities had sought the ability to take environmental protections into account when investing their reserve funds.” The outcome provided stakeholders with much‑needed clarity on the issue.

Turning to point 5, she says: “We have a sustainable pension that everyone can invest in. We also share resources and information and give our people tools to enable them to make changes at home.

"So, if you’ve switched to a verified sustainable energy supplier, we will give you a one‑off payment to help you meet any additional costs.”

Monaghan adds: “We’re eager for other law firms to come along with ourselves and Radiant Law, which is currently the UK’s only other law‑firm B Corp. In a way, it does us a disservice to be the only two out here.

"We’re often compared, like apples and pears, to firms who are perhaps talking about these things more than they are actually doing them. We want to see a more environmentally conscious and just transition, supported by as much of the industry as possible.”

In the interests of galvanising its own and our members’ approach to climate change, CITMA has joined and is currently receiving input from Climate Action for Associations (CAFA). This advisory group takes a whole‑sector approach to devising and implementing climate‑friendly solutions and initiatives.

CAFA aims to decant its knowledge throughout entire industries by supporting professional bodies and industry associations, which can then pass on the relevant know‑how to their member organisations.

“It’s a really simple idea,” says CAFA Co‑Executive Director Alison Heppenstall. “ If we can encourage membership bodies to convene and rally, and to accelerate action across the industries they represent, we will be able to drive much more momentum and generate far greater change at a faster rate. And so far, so good.”

CAFA’s resources are heavily weighted towards application, not just theory. “There’s enough science to convey the meaning and importance of taking action,” Heppenstall says, “but not so much that it would confuse the reader.

"We have guides, templates and toolkits – for example, a Climate Action Plan and a seven‑step Roadmap for Change. There’s a carbon calculator, which will shortly be reissued with much more interactivity.

"We have a range of policy templates which organisations can use to instil behavioural change, plus how‑to guides in the form of checklists and step‑by‑step methodologies for cutting emissions.”

She adds: “As we see the emergence of organisational standards and compliance around climate change and sustainability, the legal sector will be under increasing scrutiny to ensure that it is leading by example.”