How to make a winning return to in-person networking

Networking in person is back – but some professionals may be unsure about returning to the fray. Here are some thoughts on how to put the people you network with at ease. 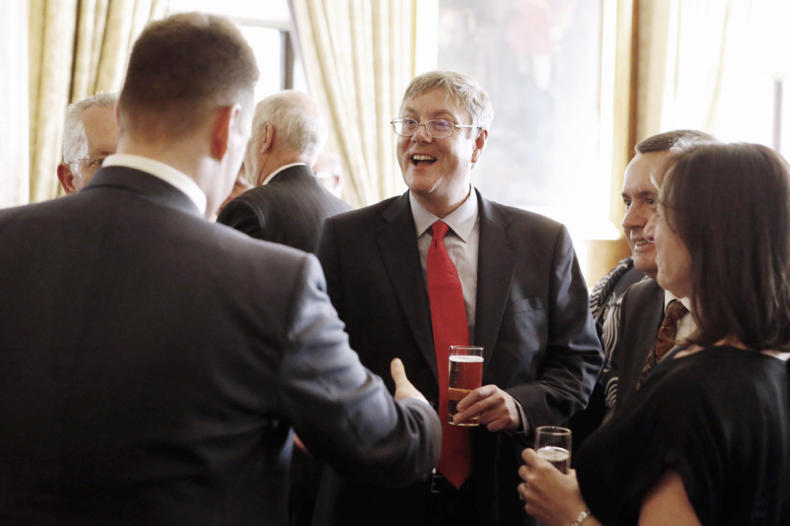 Just as culture fans are steadily flocking back to galleries, cinemas and theatres, legal professionals are sticking their heads above ground, blinking away the dust and heading back into the world of in-person networking.

As with any period of adjustment or re-acclimatisation, that gradual emergence into the artificial light of the profession’s conference halls will be accompanied by a mild sense of shock. Is this all a bit premature? Is it sustainable? And are industry colleagues – yes, that means you – maintaining their Covid hygiene habits?

Amid those concerns, let’s take a look at some of the key routines, behaviours and manners that are going to help in-person networking thrive as we march ever onwards from the height of the pandemic, while acknowledging that Covid is a fact of life we’ll all have to manage going forward.

First of all, it’s vitally important to…

Most conference or networking events will have an online list of likely and/or confirmed attendees. So, to offset any worries you may have about how much time you’ll have to spend roaming around a large room full of people in search of potentially helpful contacts, swot up on the list in advance and narrow down your field.

Once you’ve done that, connect with your preferred networking targets on LinkedIn. Drop them a quick line on the site to introduce yourself, and let them know that you will be going to the event in question and would love to meet up there.

As well as eliminating a fair bit of the on-the-spot jostling that happens at networking events, it takes care of all the fiddly, hands-related stuff around giving out business cards: if you are connected on LinkedIn beforehand, you will already know where each other is at. Plus, your profiles will tell you far more about each other than a small piece of cardboard could.

2. Be at your most empathic

For as long as networking has been a thing, there has always been an implicit view among a certain contingent of the professional world that the smiley, chatty part of the process is a thin veil for the hard, transactional exercise of getting the right results out of the right people.

In the post-pandemic phase, that stance is just not going to cut it (if, indeed, it ever did).

Industry colleagues will have understandably mixed emotions about getting out there and pressing the flesh again. Some will be very excited, others will be on the opposite end of the spectrum and yet more will be bobbing around somewhere in the middle, not really sure what to make of it all.

It’s highly likely that some professionals will manifest their anxieties by talking about personal subjects, just to provide themselves with a bit of a pressure valve before turning to more work-related matters.

As such, networking is going to require a bit more sensitivity and emotional intelligence. You yourself will need to be the managing partner of ensuring that the person you speak to feels relaxed and at ease. And that calls for a more empathic, rather than goal-fixated, approach.

If your networking subject looks as though they’re standing a preferred metre or so away from you, that’s probably because they are. So, respect that, and don’t spend your precious chatting time nudging ever further into that area of personal space.

To get around the sheer awkwardness of the whole Physical Greeting Question, just come right out and ask, “Handshake, fist-bump or elbow-tap?” Or words to that effect. Anything to ensure you don’t end up looking presumptuous about it. And if that happens to spark a moment of self-effacing laughter while you both figure out each other’s gesture preferences, well great: you’ve just broken the ice.

During the actual chatting bit, it’s vital to show genuine curiosity and interest in the person in front of you, and listen attentively. On either side of the bargain, a hairdryer of one-way verbal traffic is not a good look; in fact, it’s a major turnoff.

With that in mind, a broad and open, “So – how’s everything going for you, then?” at the outset, followed by an easy-going tennis match of open questions and lively answers, will kindle a conversation that gradually takes on a life of its own.

Once time’s up and you need to move around the room to someone else, express your gratitude to the person in front of you and convey that you’ve found your minutes with them entertaining: “Thanks so much for this – I’ve had a great time speaking to you, but I just need to head off and catch up with…”

A repeat of the agreed physical greeting – perhaps accompanied by an echo of that trusty, self-effacing laughter – wouldn’t go amiss. And don’t forget to make a commitment to catch up with them either by email or LinkedIn sometime in the next few days (and stick to it).

Final opportunity to get hold of our books