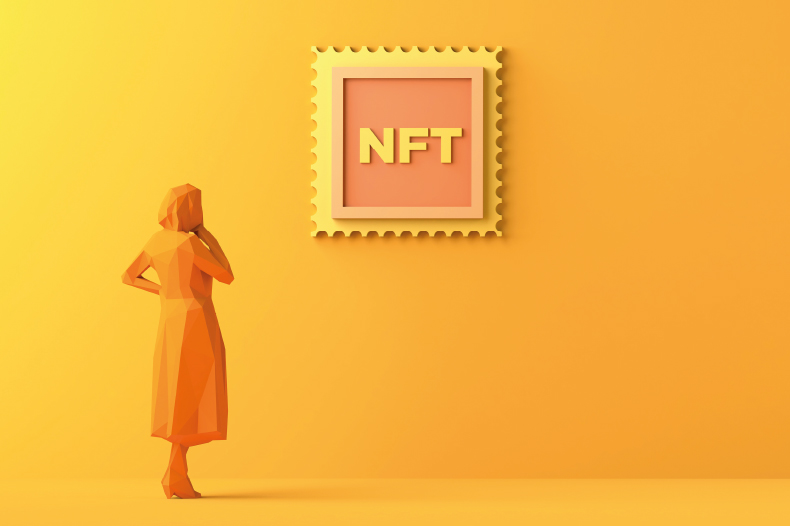 Despite being in circulation since 2014, non‑fungible tokens (NFTs) experienced a meteoric rise in popularity in 2021.

On 10th June 2021, prestigious auction house Sotheby’s sold the Quantum NFT by the artist Kevin McCoy for just over $1.4m. Quantum was first “minted” (created) on the NameCoin blockchain in May 2014 and is widely agreed to be the first‑ever NFT.

The process of minting an NFT involves a marketplace such as OpenSea, Nifty Gateway or Rarible publishing an NFT on a blockchain for sale.

A few NFTs have made headlines around the world for selling for millions, such as The Merge by the artist Pak, which having gathered more than $91m in sales became the world’s most valuable NFT on 2nd December 2021.

The NFT landscape involves a myriad of sectors such as art and fashion, but also music and sport.

For example, the American rock band Kings of Leon released its eighth studio album When You See Yourself as an NFT. Meanwhile, a lucrative partnership between NBA Properties, Inc and Dapper Labs, Inc to create “NBA Top Shot” launched in October 2020.

NBA Top Shot is an NFT marketplace for selling or trading “NBA moments”, which are digital collectibles of memorable highlight clips. A clip of Lebron James emulating a dunk performed by the late Kobe Bryant sold for $387,600.

However, NFTs can also be the subject of litigation for trade mark and copyright infringement.

One of the most notable NFT disputes involves a trade mark infringement action brought by the luxury fashion house Hermès against Mason Rothschild, creator of a collection of NFTs he coined “MetaBirkins”.

So, aside from the potential commercial opportunities, NFTs raise complex and interesting questions from a legal and regulatory standpoint.

IP practitioners will be concerned with the issues of ownership, commercialisation and enforcement in this intersection of digital assets and IP rights, specifically in relation to trade marks and copyright.

What can be an NFT?

Simply put, an NFT is a digital “token” associated with an underlying physical or digital asset. In theory, anything can be tokenised. For example, global sportswear brand Nike recently acquired the virtual shoe company RTFKT, which sells digitised versions of shoes.

However, the most common asset underlying an NFT is digital artwork. An example that made the press recently was an NFT associated with a work from the artist Mike Winkelmann, better known as Beeple, called Everydays: The First 5000 Days, which was sold by auction house Christie’s for $69.3m in March 2021.

Understanding NFTs requires detaching the token from the underlying work, though the two are intrinsically linked.

Just like any other digital collectible, buyers hope the value of the underlying work or product attached to the NFT will increase in value and generate profit when sold on.

One of the unique selling points of an NFT is exactly that: its uniqueness, which is perplexing given one work of art can be made into copies, and each copy could be tokenised with an individual NFT. The key point is that no two NFTs are the same.

For example, two £1 coins are equal, exchangeable and divisible; however, it is impossible for NFTs to have these properties because each holds a unique identifier, hence they are “non‑fungible”, ie non‑interchangeable, which also distinguishes NFTs from cryptocurrencies such as bitcoin.

An NFT is minted by way of a “smart contract” published on the blockchain, which contains essential data relating to the NFT – typically its TokenID code, smart contract address, transaction history and a link to the underlying digital work, if applicable.

The smart contract will also reference the NFT’s “metadata”, which is an unalterable record describing the work or product that the NFT represents. Sophisticated smart contracts specify certain terms and conditions in relation to the sale of the NFT.

The other key selling point of NFTs is their ability to authenticate ownership by virtue of blockchain technology.

The fact that the provenance and ownership of an NFT are tracked on an encrypted blockchain such as Ethereum is another justification for their popularity.

The IP issues at play

The realm of NFTs gives rise to legal uncertainty because there is yet to be a UK court judgment that specifically deals with them in the context of IP.

There are various NFT marketplaces with platform‑specific takedown measures that may well resolve an issue for many rights holders, such as the unauthorised sale of an underlying work as an NFT, but where they do not, litigation may be the only recourse.

In the absence of an NFT court precedent, the basic principles of UK trade mark, passing off (ie unregistered trade mark rights) and copyright law must be applied.

However, there are characteristics specific to the NFT space that may pose obstacles to the success of a claim under trade mark or copyright infringement, or passing off.

Sections 9 and 10 of the UK Trade Marks Act 1994 (TMA) outline the basic requirements of a successful trade mark infringement action based on double identity or likelihood of confusion in relation to the contested marks.

Trade mark owners may find that some but not all of the infringement prerequisites are met when it comes to NFTs.

Consider: “The proprietor of a registered trade mark has exclusive rights in the trade mark which are infringed by use of the trade mark in the United Kingdom without his consent.”

As with any suspected online infringement, it must be established that UK consumers are “targeted”. This principle was borne out in the High Court judgment in Argos Limited v Argos Systems Inc, iin which the court looked for specific instances of targeting, such as prices in a particular currency.

Targeting may be challenging for brand owners to establish because both NFTs and the digital currency with which they are bought transcend borders; they are not specific to a particular jurisdiction.

However, targeting may be made out where the NFT listing is on a UK‑specific NFT platform, for example.

Nike, for example, has brought a trade mark infringement claim in the US against the online clothing marketplace StockX for selling NFTs associated with unauthorised images and physical items of Nike footwear.

Arguably, an NFT listing constitutes “offering or placing on the market”, which is an infringing act explicitly listed under s10(3B)(a) TMA, and is therefore likely to meet the criterion of use in the course of trade.

Finally, for infringement purposes, the use made of the allegedly infringing sign must be in relation to identical or similar goods or services to those covered by the registered trade mark.

A number of brands, including Nike and Monster Energy, have filed trade mark applications in multiple jurisdictions covering NFTs and various virtual goods.

Brand owners faced with a problematic NFT listing, who do not have registered rights covering NFTs or the underlying virtual goods, may encounter difficulties establishing that their rights in physical goods are similar to the virtual versions.

Reputation arguments are likely to assist in these instances, if applicable.

Where brand owners deem an NFT listing misrepresents the origin of the underlying product, there may be a cause of action available under passing off (or “unfair competition” in other jurisdictions), provided the brand owner has accrued protectable goodwill and damage would be caused to the protected brand as a consequence of the misrepresentation.

It is a common misconception that the buyer of an NFT automatically transfers rights in the underlying work. In reality, the buyer acquires rights in the metadata of the NFT, which describes the work, and not in the work itself.

NFTs themselves are unlikely to be considered protectable works since they are essentially a string of numbers representing data on the blockchain.

However, the act of reproducing and distributing the underlying original work that NFTs are attached to may give rise to a cause of action under copyright infringement.

The NFT marketplace is rife with NFTs associated with works deemed to be unauthorised copies of the original.

Copyright infringement may occur in circumstances where the NFT seller, without permission from the copyright owner, communicates the work to the public via an NFT marketplace such as LooksRare, which sells MetaBirkins.

A major drawback of NFTs is that it can be difficult for prospective purchasers, investors or speculators to understand the rights that they will be acquiring vis‑à‑vis the underlying work that the NFT is based on.

However, it is possible for assignment agreements (which transfer IP rights such as copyright and trade marks) and IP licence agreements to be executed and stored in smart contracts, which may help resolve these entitlement problems.

Owners of a CryptoKitty are granted a limited, non‑exclusive licence to commercialise the art, design and drawings of a CryptoKitty in relation to merchandise provided that such use does not generate revenue exceeding $100,000.

Only time will tell if the NFT phenomenon lives up to the hype and the digital asset class will continue to ascend new heights until the ceiling for the value of NFTs is ultimately reached, or collapses.

Arguably, the commercial appeal of NFTs lies in the ability to assert that you are the owner of a unique digital asset, such as the NFT for Twitter co‑founder Jack Dorsey’s first tweet (“just setting up my twttr”), which was sold for $2.9m in March 2021.

On the other hand, the increasing number of questions being raised about the carbon impact of the vast server farms needed to host blockchains, including NFTs, may challenge future valuations.

In the meantime, the NFT sphere continues to evolve, which presents both challenges and opportunities for rights holders, particularly in view of the increasing popularity of the metaverse.

Brands such as Gucci, Coca‑Cola, Louis Vuitton, Selfridges, Pokémon and many others are already embracing this new virtual landscape.

As with well‑known social media and marketplace platforms, takedown measures are likely to be the first port of call for brand owners who fall victim to the perils of the NFT world.

Takedown procedures will vary according to the NFT platform in question, and their efficacy is uncertain, given the novelty of NFTs.

As the legal world plays catch‑up with the technology, brand owners obliged to enforce their rights in court may find they are faced with NFT‑specific challenges to overcome.

Looking ahead, brand owners would be wise to consider extending their existing trade mark protection to virtual versions of their products and to discuss the internet monitoring capabilities of their current watch service provider to ensure that NFT retail platforms are covered.

Here, IP practitioners are uniquely positioned to assist brand owners to strategically leverage their IP portfolio but, at the same time, mitigate the risks of IP infringement. Watch this (virtual) space.