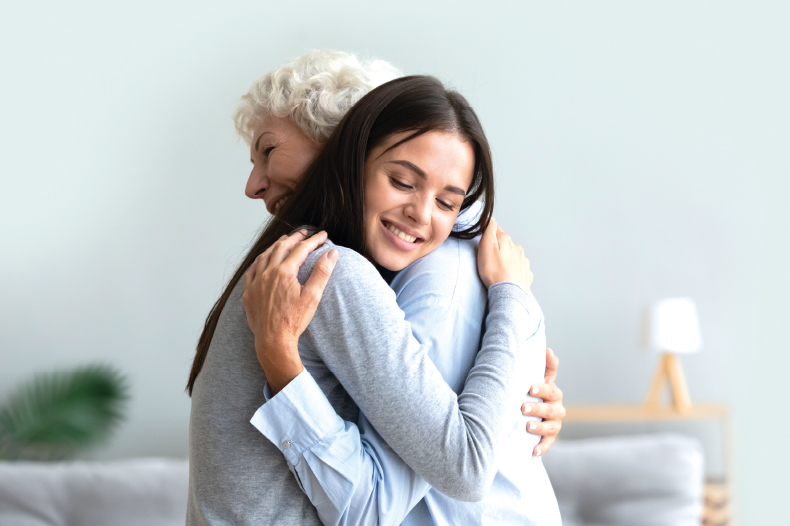 According to the charity Carers UK, around 6.5 million people in the UK – that’s one in eight adults – have caring responsibilities.

The charity’s figures also suggest that this segment of the population is constantly mobile, with 6,000 of us taking on a caring responsibility every single day (equivalent to 2 million people per year).

In 2020, at the height of the COVID-19 pandemic, the nation’s bedrock of carers more than doubled, hitting 13.6 million. And currently, more than 1 million carers look after more than one individual.

Carers UK provides help and advice for people who are dealing with the onerous time pressures that caring routinely presents, the professional effects of which are not to be underestimated.

Some 5 million employees – around one in seven workers – juggle caring with their working lives.

However, many carers find that process unsustainable. Every day, around 600 people leave their jobs to devote themselves to supporting older or disabled relatives.

Around 1.4 million people provide more than 50 hours of care per week.

The legal sector is a microcosm of this national picture. In March 2020, a diversity survey by the Solicitors Regulation Authority (SRA) found that 9% of almost 190,000 respondents were caring for someone other than a child.

While data on specific legal disciplines is scant, a separate, more recent report from the Cost Lawyer Standards Board chimed with the SRA’s figures: 9% of participating costs lawyers said they had caring responsibilities for someone with either long-term physical or mental ill-health, or a disability.

As we are about to see, the IP community also overlaps with this circle of the legal profession in which caring is a significant – and often challenging – part of daily life.

AA Thornton Partner and Chartered Patent Attorney Dr Marianne Privett has acquired varied experience of caring through looking after her husband, who suffered with degenerative disc disease, and her sister, who is autistic with a learning disability.

The chronic, disabling back pain that stemmed from her husband’s condition, which affected his lower spine, spawned a two-year period of upheaval during which normal scheduling of everyday activities proved all but impossible.

“Our eldest daughter was born in 2012,” Privett explains, “and around that time, my husband’s pain got particularly bad. As a result, I essentially became our child’s primary carer. I often felt like a single parent: while I had my husband’s full emotional support, and he was deeply involved with parental decision-making, his pain was so severe that he was unable to change or dress our daughter.

"Even something as minor as taking a walk outside was an event we’d have to plan for very carefully to ensure he’d have time to recover afterwards.”

Social planning was even trickier and didn’t always bear fruit. “One of my husband’s friends was getting married,” Privett says, “and we thought we’d be able to make it if we could travel on the Thursday, rest on the Friday, go to the wedding on the Saturday, rest on the Sunday, then travel back on the Monday.

"The bride and groom thought that blocking out five days to attend an occasion that would last just a few hours sounded a bit much, and we ourselves were concerned about how the childcare arrangements would work.

"So, they told us we didn’t have to come all that way – bearing in mind that ‘all that way’ meant from south-east to north-west London.”

Business-related travel also required special preparation. “We had no family nearby,” Privett explains, “so whenever I had to go away for work we were entirely reliant on friends.

"I’d leave our daughter with a couple who had a girl the same age. They’re lovely people – but handing her over to them for the first time was very difficult.”

Amid all the extraordinary hurdles that became part and parcel of her daily routine, Privett bunkered down and pressed on, reluctant to reflect upon or open up about what she was going through.

“My husband wasn’t sure whether he’d be able to carry on working,” she says. “As such, I felt I had no choice but to continue as the main breadwinner and earn as much as possible to look after us and pay the mortgage.

"I was also self-conscious about whether my firm would notice a difference in me. When I started there, my husband was in good health and my mum was around to help out with my sister. I was seen as fully capable, and I didn’t want that perception to change.”

Privett adds: “The stigma around speaking up always hovered in the background. The pressure was two-fold: first, if you tell the people around you how hard things are, you have to recount everything – and you may not want to delve into all the details.

"Second, you worry that whoever you’re speaking to will think you’re somehow less capable and less worthy of promotion, and I didn’t want to be judged in that way.”

In late 2014, Privett’s husband had surgery to remove his degenerated disc and fuse his

vertebrae – a procedure that alleviated his sciatica and restored sensation to his feet.

This enabled him to walk without a stick. Since then, he has been able to live with a much lower level of discomfort.

However, by contrast with the rigours of his condition, which called for constant lifestyle adjustments, Privett’s sister has occasionally required more urgent interventions.

“She lives fairly independently in a flat, with the help of support workers,” Privett explains. “However, a few years ago she missed a filing date for her Universal Credit and Personal Independence Payment. Her support workers could remind her about those bits of life admin – but, of course, they couldn’t make her fill in the paperwork.”

By the time Privett learned the truth of the situation, she recalls, her sister’s bills were in the red and emergency intervention was needed.

Sorting it out with the powers that be “was quite a job – so we’ve put steps in place to make sure that won’t happen again.”

Earlier this year Privett’s sister tested positive for COVID-19 – thankfully, she had been double-jabbed, so wasn’t seriously ill – but as her support workers were unable to attend, Privett had to rally round.

“My husband had installed TeamViewer, which enables you to access someone else’s computer with their permission, so I was on the phone with my sister while remotely using her laptop, arranging her COVID tests and ordering her food and medicines.”

Privett says: “We now have a system where, if she faces a challenge, she comes to me. But I have to keep on top of things and monitor her a bit to make sure she doesn’t end up in a situation where something goes wrong on the admin side and everything just snowballs.”

Someone who understands the scheduling challenges that Privett has faced is Chris Clarke, a patent attorney at Cambridge-based pharma company Vectura.

Clarke’s 14-year-old son Oliver looks big, strong and healthy, but he has a rare Chromosome 15 disorder.

As Clarke explains: “Oliver is learning disabled, with very limited speech. Most 14-year-old boys can get themselves to school and back, but Oliver is different. In many respects, he’s quite toddler-like.”

He continues: “Another feature of Oliver’s disorder is that he is often quite disturbed in the night and tends to rise very early. P

lus, he has no control over his appetite and will simply eat and eat if left unsupervised.” As a result, Clarke faces time-management squeezes at either end of the working day.

“In the morning, it’s a case of being around Oliver before he goes to school so my wife and I can keep an eye on his eating and prepare him for the day.

My wife actually works at a school. Once Oliver comes home, it falls to me to police his eating because my wife can’t leave work until a specific time in the evening.

Despite his learning disability, he is very sharp and cunning: you may think he’s happily watching TV, but as soon as you go to the loo, he’ll be raiding the biscuit tin.”

In the hours between, Clarke drives his work with ruthless efficiency. “As soon as Oliver goes out the door, it’s a matter of cracking on to fit in as much work as possible.

"I like to cluster my tasks. I deal with families of cases, so if I have something to do on a particular case in one country, I’ll wait till two or three more relevant action points come up and I’ll do them all at once. That saves me from having to relearn the particulars of cases after big gaps.”

In terms of external help, Clarke says: “My wife and I have quite a lot of support. We have a social worker, plus a respite carer who Oliver stays with one weekend a month to give us a break. Mencap has also been a great source of information and advice.”

Help is at hand

As their caring responsibilities have progressed, Privett and Clarke have both witnessed evolutions in how law firms are approaching this terrain. Privett stresses: “AA Thornton has always been great to work for, but now it has in place a formal employee assistance programme offering exactly the sort of help I’d have sought out years ago, had it been available at the time.”

Clarke notes: “In Oliver’s early years, when my wife and I were trying to get a diagnosis so we could figure out what our lives were going to look like, I had a line manager who had quite a traditional attitude: that I should be the one doing the work while my wife worried about the caring.

"Thankfully, my current employer is far more laid-back and supports agile, flexible work. I’ve been working mostly from home since the pandemic began.

"My employer is also setting up an initiative to look at every aspect of diversity in the business, from caregiving through to ethnicity, gender and sexuality.”

Alongside the developments they have seen in their respective workplaces, Privett and Clarke have joined forces to form IP Ability: a community within the IP Inclusive network. Launched in 2019, IP Ability aims to provide IP professionals who are either living with disabilities or caring for disabled relatives with a one-stop shop for advice and empathy. “To be honest, I wish something like this had been around ten years ago,” Clarke says.

More recently, IP Inclusive launched its Non-traditional Family Network, which also offers help and support to carers, particularly those who are single parents.

One of its organisers is Steph Bartley, a Paralegal at Abel + Imray. Mindful of the stigma that Privett has highlighted, what would she say to a carer who’s nervous about seeking help?

“I completely understand why you may feel like that, because I’ve felt the same,” she says. “But there will definitely be people who have been in situations similar to yours, so you won’t feel alone or ashamed.

"To start with, perhaps you could just join our LinkedIn group, where you can observe interactions and read our blogs and posts. If you then feel a bit more at home, why not join one of our events?

"You can do as much or as little as you want. Even if you don’t feel happy speaking up, just listening to other people sharing their stories will make you feel like you’re not alone.”

Find out more about IP Ability and the Non-traditional Family Network.