We have been made aware that holders of registered intellectual property continue to receive ‘renewal notices’ from Stern Young & Partners (SYP). 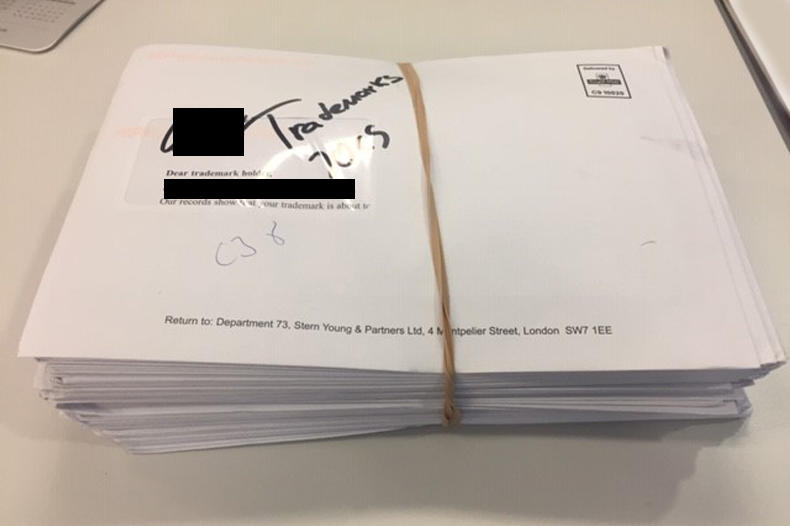 SYP continues to send, in significant quantities, renewal notices directly to registered rights holders. We have received examples from rights holders as well as from representatives.

Back in July, we reported that the fees being proposed by SYP are disproportionately high and inappropriately inflated above the official fees for a UK trade mark renewal.

These renewals are often sent well in advance of the usual renewal reminder from the UK Intellectual Property Office.

In one particular circumstance, a rights holder inadvertently signed and returned the notice, subsequently receiving an invoice from SYP. This was not subsequently paid, but please remain vigilant.

The Advertising Standards Authority has issued a ruling against SYP following a complaint raised by one of our members.

This was only an ‘informally resolved’ ruling which means the details aren’t fully disclosed.

We continue to have conversations with the UK IPO about this particular sharp practice and other examples that we know are currently in existence.

“It is concerning that these approaches are being made directly to trade mark owners. We urge anyone who receives such a letter to not sign it and pay, but to speak to a Chartered Trade Mark Attorney.

“There is no need to renew a trade mark registration until you have received official notification from the office the registration is with.

“Chartered Trade Mark Attorneys are fully regulated legal professionals and have achieved significant standards of qualification to practice as a trade mark attorney. They are best placed to advise on trade mark legal matters.”