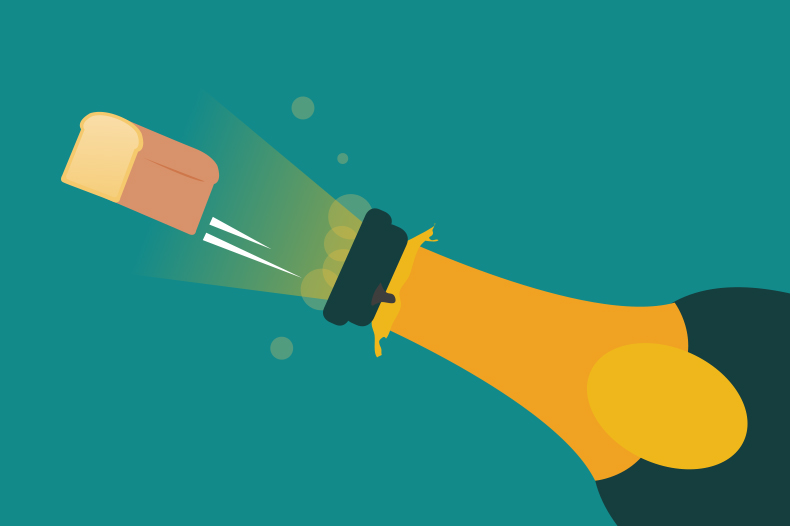 On 16th March 2017, Breadway (the Applicant) filed an application to register the word Champagnola as an EU trade mark. The application initially covered bakery goods in class 30, bakery services in class 40 and services for the provision of food in class 43.

Comité Interprofessionnel du Vin de Champagne (the Opponent) filed an opposition on the grounds of Article 8(4)(a), now Article 8(6) EUTMR, based on the Protected Designation of Origin (PDO) for Champagne, protecting wine by virtue of Regulation No. 1308/2013 (the Wines Regulation). Class 43 was then removed from the application following a parallel successful opposition.

The Opposition Division (OD) was satisfied that the extensive evidence filed by the Opponent proved that Champagne has an outstanding reputation, but the opposition was ultimately rejected. The OD’s reasoning was that the word Champagnola does not evoke the PDO Champagne and that the contested goods and services are not comparable to wine. The Opponent appealed the decision.

In assessing Article 8(6) EUTMR, the Board of Appeal (BoA) clarified that, as a result of the combined application of Articles 102 and 103 of the Wines Regulation, when an application is filed for goods and services that are not comparable to wine, registration of the contested sign must be refused if it constitutes a misuse, imitation or evocation of the PDO, where the PDO has a reputation and use of the contested sign would exploit that reputation. The BoA stated that the test for exploitation of a reputation is in essence that outlined in Article 8(5) EUTMR. On this point, the BoA explicitly criticised the OD’s reasoning for misconstruing the provisions of the Wines Regulation.

The Opponent’s evidence successfully proved the reputation of Champagne, due in particular to the “immense sales figures”, export figures and publications. The Opponent also proved that bakery goods can be flavoured or simply consumed together with Champagne wine.

The BoA held that it is sufficient that the average consumer will get the impression of a vague connection with Champagne and found that there is exploitation of the PDO’s reputation. The application was therefore rejected in its entirety.

The key factor that tipped the balance in favour of the Opponent was Champagne’s enormous reputation. It is often a paradox of highly reputed brands that they can take their reputation for granted and fail to prove its weight in trade mark proceedings. In this case, however, the Opponent properly supported its reputation claim with extensive evidence.

This decision is also a clear warning to trade mark applicants that even a vague connection with a reputed PDO may be fatal to the registration of a trade mark.